by Ronald
Most of the collections of the world's greatest museums linger in storage, unseen, appreciated, often forgotten. A public art depot in Rotterdam may change all that. Where do you go to the see the world’s finest art? One would think to leading museums such as the Louvre, the Metropolitan Museum of Art or the Museum Boijmans van Beuningen. Almost right. Five percent right, to be exactly, since… Read more...

by Ronald
The popularity ratings of the Dutch monarchy are the envy of every president worldwide. Traditionally around 80% during the reigns of Queen Juliana (1948-1980) and Queen Beatrix (1980-2013) it has waned somewhat under the still relatively inexperienced King William Alexander to around 65% in the face of seeming improprieties by Willem Alexander and other members of the royal family during the… Read more... 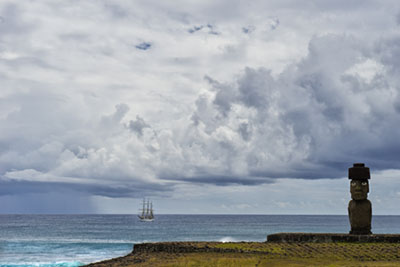 How would you react if a spaceship landed in your backyard spilling a crowd of Martians? Surprised, to say the least. That is what the reaction must have been of the Polynesian inhabitants of Easter Island when, in 1722, three Indiaman ships appeared at their shore. The Eastern Islanders had lived for hundreds of years on their tiny, completely isolated island in the absolute conviction that they were the only humans living on the face of the earth, being the sole survivors of a cataclysmic disaster that had forced them to migrate from their distant native lands to this speck of dust in the vastness of the Pacific Ocean.

The three ships that had suddenly appeared carried the Dutch explorer Jacob Roggeveen and his crew who were attempting to discover the large landmass that English buccaneer Edward Davis had reported seeing west of the Chilean island Juan Fernández in 1687, calling it Terra Australis. Jacob was the son of Arend Roggeveen, an accomplished Dutch scholar and educator from Middelburg (Zeeland province). In 1675 the elder Roggeveen obtained a charter from the States General of the Dutch Republic for a South Sea venture. He and his associates, however, were unable to obtain financial backing for it and abandoned the project. Arend died in 1679, but his dream lived on in his son, Jacob.

Jacob Roggeveen’s professional titles included notary of Middelburg, doctor of law, and Council of Justice of the Dutch East India Company in Batavia (today’s Indonesian capital Jakarta). He was a wealthy man when he returned to Middelburg from the East Indies in 1714 but was soon banned from the town as a result of his support for liberal theological doctrines. In 1721, at the age of sixty-two, Roggeveen approached the Dutch West India Company to propose making an exploratory voyage to the unknown regions of the Pacific Ocean, which were within the boundaries defined in the company’s charter—essentially reviving his father’s project.

Departing in August 1721 from Texel, Roggeveen guided his expedition (consisting of the Arend, Afrikaansche Galley and Tienhoven) past Madeira, across the Atlantic toward Cape Horn. After rounding Cape Horn, Roggeveen anchored on 24 February at the San Juan Fernández islands, a small archipelago some 670 km (416 miles) off the coast of Chile. The explorers spent several weeks for repairs and maintenance and then set sail due west in search of Terra Australis. From there, on a west-northwest course, they sailed for more than 1,500 miles before, on Easter Sunday (April 6), they sighted what they hoped was the coastline of the fabled Southland: it was, in fact, what was from then on called Easter Island. 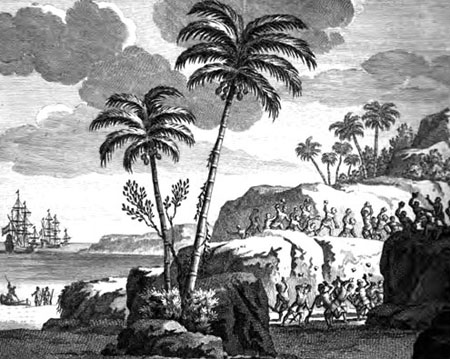 Smoke was seen curling up into the sky and huge monolithic statues were seen dotting the shore, indicating the island was inhabited. During the following days, however, the high swell made it impossible for the barges to land on the island. The initiative to establish contact was then taken by the islanders, one of whom sailed to the Thienhoven on 7 April. This first encounter with an inhabitant of Easter Island was elaborately recorded in Roggeveen’s journal: “After we had sufficiently beguiled ourselves with him, and he with us, we started him off again in his canoe towards the shore, having presented him with two strings of blue beads round his neck, a small mirror, a pair of scissors, and other like trifles, which seemed to have a special attraction for him.”

It wasn’t until 10 April that Roggeveen succeeded in having 134 man landed on the shore of Easter Island. They were met with such enthusiasm that the crew felt threatened and shots were fired. At least ten inhabitants were thus killed. Despite this disastrous incident Roggeveen was able to explore the island unhindered and to observe the customs of the indigenous community and he investigated at first hand with much awe and surprise the huge stone statues (moai) that he had already spotted from sea. “… These stone figures caused us to be filled with wonder, for we could not understand how it was possible that people who are destitute of heavy or thick timber, and also of stout cordage, out of which to construct gear, had been able to erect them; nevertheless some of these statues were a good 30 feet in height and broad in proportion.” Apparently, Roggeveen had stumbled upon a once thriving and industrious culture.

Ever since, the moai of Rapa Nui (which is the indigenous name of the island) have been the subject of much speculation and research. What were they for? Who do they represent? How could the islanders, with their small numbers, have created almost a thousand of these monuments? How were they transported from the quarry to their final locations, bearing in mind that the largest weighed up to over 80 tons? And why were so many apparently abandoned at the quarry and elsewhere?
Roggeveen, eager to find Terra Australis, did not attempt to find the answer to these questions. After having spent several days on Easter Island, Roggeveen’s expedition proceeded west across the Pacific, sighting as the first European the islands of Bora Bora, Maupiti and most of the Samoan islands (but never Terra Australis) before reaching the Dutch East Indies on September 10, 1722. By then, the voyagers were in dire straits; one ship had been lost, and half of the original crew members had succumbed to diseases.

When the expedition reached Batavia, the Dutch East India Company immediately seized Roggeveen’s ships and their cargoes and arrested Roggeveen and his men for violating the company’s monopoly in the area. They were not released until November and reached the Netherlands on July 11, 1723. Negotiations ultimately resulted in compensation for Roggeveen and his backers. He settled in Middelburg once again, this time without any civic objection. He died in 1729, aged 69. But somehow, somewhere, Roggeveen’s original journal of his Pacific voyage, documenting his discoveries, had disappeared. A copy, however, was finally found in 1836 in the archives of the Dutch West India Company in Middelburg. Published in 1838, this journal gave the world the first authoritative account of the expedition; until then, the most popular and famous version was the 1739 French edition of Karl Friedrich Behrens’s account that had appeared in 1737. Behrens was a low-ranking military officer on the expedition, and his publication contained numerous factual errors and embellishments 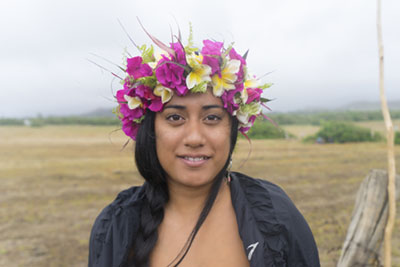 The fate of Easter Island after Roggeveen’s visit was not a happy one. The next foreign visitors (on 15 November 1770) were two Spanish ships, the San Lorenzo and Santa Rosalia. The Spanish reported the island as being largely uncultivated and the seashore lined with stone statues. When James Cook visited the island in 1774 and Jean-François de Galaup de La Pérouse after him in 1786, they reported the local culture in decline. The population was even smaller than what Roggeveen reported and many of the moai had been toppled. What exactly happened in the intermediary has become part of the enigma of Easter Island. Today, most scientist agree that after the moai culture, Easter Island witnessed a gradual decline (rather than a sudden, ecological disaster as was until recently assumed) but with ensuing civil strife, even civil war. What caused the decline is not entirely clear. Roggeveen already reported that the island was largely barren (unusual in the subtropics) and there is general agreement that the island must have been covered by forest when the Polynesian migrants arrived there first. One theory suggests that the rats the Polynesians introduced inadvertently ate the seeds and saplings of the trees, thus preventing the forests to regenerate. Whatever the cause, the number of inhabitants dwindled and most of those who remained were taken into slavery by Peruvian raiders in the late 19th century, thereby virtually destroying the culture and traditions of the Rapa Nui community, including the total erasure of knowledge of the Rongorongo script, a hieroglyphic script unique to Easter Island and the whole Pacific (and still not deciphered). Missionaries subsequently convinced the handful of people who remained to convert to Christianity, promising they would persuade the Peruvians to release the slaves and return them to Rapa Nui. The missionaries kept their word and 1,500 indigenous people were shipped back to the island. Western diseases such as the measles and water pox, however, took a huge toll and sadly only ten percent of the original number reached the island alive.

In 1888 the Chilean government offered the 150 or so remaining inhabitants protection if they joined Chili, a country whose shores are 2,000 miles away from the island. The people of Rapa Nui did not have much choice in the matter. Not surprisingly, the Chileans didn’t make the welfare of the islanders but their own strategic and commercial interests a priority and largely neglected their well-being. The situation did not improve until the middle of the last century when scientists started trying to unravel the mysteries of the island and the mass media created a worldwide interest into this mythical island at the end of the world. 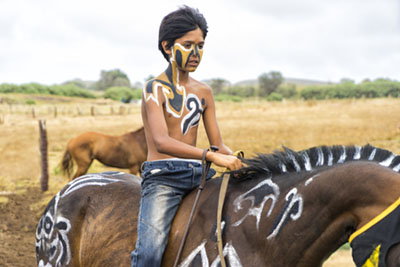 Today, Easter Island, or Rapa Nui, is still relatively undeveloped, despite the presence of an airport, paved roads and hotels. Many of the erstwhile toppled moai have been put back up again and restored and most of the island has been designated a UNESCO World Heritage Site. The inhabitants, whose numbers have swelled to over 7,000 (also thanks to immigration from Chile) enjoy a certain amount of autonomy and have succeeded in stopping undesirable touristic developments that they feared would negatively affect their traditional culture and turn their island into another Hawaii or Tahiti. This proud and dignified people, who have suffered so much, take great pains to revive and preserve whatever is left of their unique cultural heritage and pass it on to the next generation. The culmination of this effort is the annual ten-day Tapati Festival which, to the foreign visitor, is a festive mixture of carnival and the Olympics and takes shape in numerous contests (including fishing, basket weaving, surfing, dancing, singing and horse racing). Presently, absolutely nothing on the island (including in its historical museum) commemorates the enterprising Dutchman, Jacob Roggeveen, who gave Rapa Nui its European name. Almost as if by denying his part in the history of the island could make one believe the island had never been discovered at all.