It took almost ten years and one billion dollars to complete the mega project that is Rotterdam's overhauled Central Station. Now tourists walk at a leisurely gait across the vast esplanade in front of the recently overhauled Central Station, soaking up the sunshine. Occasionally they are pausing to make snapshots or to admire the huge inverted V of the roof over the station’s main concourse whose reflecting stainless steel gives rise to the building’s iconic character and which points to the heart of the city. “This grand entrance,” says Team CS, the architectural cooperative responsible for the design, “is clearly the gateway to the high-rise urban centre of Rotterdam.”

Railway termini are our gates to the glorious and the unknown. Through them we pass out into adventure and sunshine, to them, alas! we return.

For more than eight years travellers arriving or leaving Rotterdam by train used a makeshift station as the old station was torn down and a new one was slowly erected in one of the most massive building sites the city has ever seen. The result has a high wow factor. 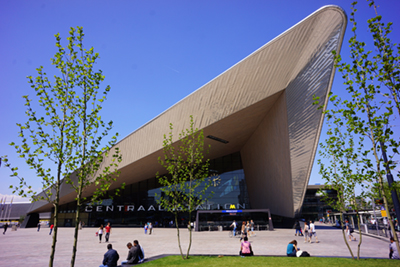 Tourists walk at a leisurely gait across the vast esplanade in front of the recently overhauled Central Station, soaking up the sunshine. Occasionally they are pausing to make snapshots or to admire the huge inverted V of the roof over the station’s main concourse whose reflecting stainless steel gives rise to the building’s iconic character and which points to the heart of the city. “This grand entrance,” says Team CS, the architectural cooperative responsible for the design, “is clearly the gateway to the high-rise urban centre of Rotterdam.” It is where post-World War II reconstruction has changed the face of Europe’s largest port and “where striking and varied modern architecture of international stature gives shape to the most alluring skyline in the Netherlands.” The latter is not a quote from the Rotterdam tourist office. It comes from the New York Times, which listed Rotterdam number ten on a line-up of fifty must-see destinations in 2014, putting it in the company of such cities as Cape Town, Rio de Janeiro and Barcelona. The trendy Rough Guide was even more flattering when it ranked Rotterdam number eight of ten top destinations for 2014. And that was even before the new Central Station was opened by king Willem Alexander last March.

To travellers a station maybe just a place to get off or on an train, for the cities that build them, however, they are essential centres of mass in the delicate and easily disturbed urban tissue and can be a decisive factor in a global economy where cities are pitched against each other in the struggle to attract businesses and employment. With the overhauled Central Station, Rotterdam – in global terms a medium large city the size of Seattle or Baltimore – has a trump card. The passenger terminal is an important national and European hub that connects international high-speed trains, national trains, tram, bus, light railway and subway. Some 110,000 passengers use it on a daily basis, a number expected to triple in fifteen years’ time. 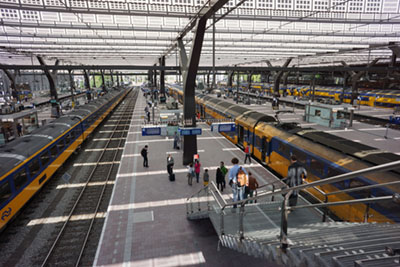 Before World War II, Rotterdam did not have a central railway station - instead there were four terminuses serving different destinations. During the devastations of the war, these stations, together with most everything else in the city centre, disappeared and after the war the city had to rethink its position in the world – and how to connect to it. In 1954 Dutch Rail developed plans for a Central Station in Rotterdam. It was designed by renowned architect Sybold van Ravesteyn and was  officially opened on May 21, 1957. For fifty years the modernist structure served its purpose but changing attitudes and expectations made the utilitarian, somewhat gloomy and inhospitable building obsolete when the new millennium was ushered in. In addition, there were new infrastructural demands. The high-speed train connecting Amsterdam and Brussels started calling at Rotterdam in 2009. A new light railway system between Rotterdam and The Hague was opened in 2006 and connected with the much extended Rotterdam subway system at Central Station. A 15% growth in population to 2.1 million in the wider area of Rotterdam between 1983 and 2008 came with increased pressures on the freeway system with long daily traffic jams as a result. To lure commuters away from their cars the authorities needed to offer an alternative. The overhauled Central Station as a major hub of different modes of public transportation offers just that.

This public transport terminal is designed for passenger comfort, which is evident in the different areas of the station. It includes commercial spaces, a lounge, restaurants, offices, parking for cars and bicycles. In the spacious concourse the passenger service functions are conveniently arranged. There is travel information, an information point, the Dutch Railways (NS) traveller’s shop, ticket vending machines and commercial functions. The grand café and the NS-lounge offer spectacular views across the hall and the adjacent tracks. Waiting areas in the concourse and passage connecting the platforms are linked to the passenger flows, with areas both for browsing and quick shopping. The new Rotterdam Central Station is a pleasant, open and transparent public transport terminal which functions as an iconic meeting point. To quote Team CS: “Interwoven into the urban network, the station connects the diverse characters of the city and marks the beginning of Rotterdam’s cultural axis. This modern and efficient building offers travellers to and from the port city all the amenities and comfort they could want or need.” It is evident to all visitors: In this banner year for ribbon cutting in Rotterdam the new station has a completely fresh and modern look with a high wow factor. 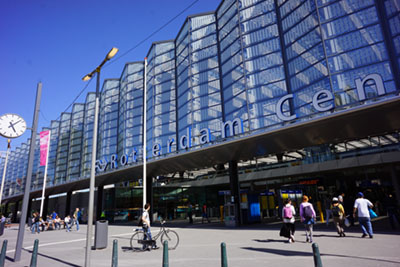 Planning the new design started in 2003 and in June 2004, Team CS, a cooperation between Benthem Crouwel Architekten, MVSA Meyer en Van Schooten Architects, and West 8, received the commission to execute the vision presented for the new Rotterdam Central Station. The challenges facing Team CS were complicated and manifold, not the least among them being that the old station had to be torn down and a new one build without inconveniencing the flow of trains and passengers too much. For this purpose, a temporary prefab station was put in place in 2007 next to the building site, while demolition and construction was carried out next door.  The masterplan  included a 16,000 sqm. esplanade in front of the grand entrance: a visual and urban continuation of the 9,000 sqm. concourse. By fitting the concourse with a floor-to-roof glass façade, arriving passenger have an unimpeded view across the esplanade towards the high rise of the city centre. The unity between concourse and the public space of the esplanade is further underlined by the use of the same Red China stone floor tiles for both.  Today passengers arriving at Central Station can continue on foot to the main urban functions at the far side of the esplanade, such as the shopping and business districts, hotels, theatres, restaurants, museums and cinemas, without even once having to cross a road. To achieve this simplicity, an underground parking for 750 vehicles and one for 5,200 bicycles had to be constructed. Vehicle traffic in front of the station is now hidden from view thanks to a new tunnel which also serves as an entrance to the station’s underground parking. At the same time, the tram station in front of the old railway station was moved to the east side of the new station and to complicate the scheme even further, the old subway station had to be replaced by a new one to accommodate the new light railway.

According to Team CS, another fundamental challenge was the difference in the urban character of the north and south side of the station. “The entrance on the north side has a modest design, in harmony with the characteristics of the 19th century residential low rise neighbourhood and the smaller number of passengers. In contrast, the grand entrance on the city side derives its new international, metropolitan identity from the concourse made of glass and wood. Today, Rotterdam Central has the appropriate structure and dimensions for the urban landscape; it is in balance with the heights that characterize the metropolis and simultaneously reflects the human scale.” 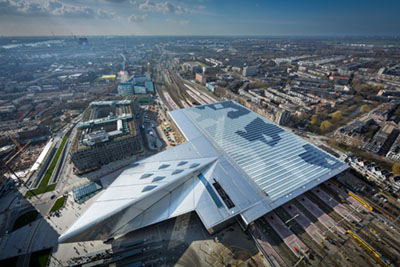 Incorporation of natural light, the warmth of the sun’s rays and a modern look are important elements in the design. The platform roof on the north side is transparent. When trains ride into the station, there is an almost tangible feeling of entering a building. Travellers on foot who are entering the main concourse from outside get an overview of the entire complex and a view to the trains that are waiting invitingly along the platforms.

A mega project of this magnitude is bound to exceed its budget, as it will almost always do. All the more surprising then, when the council of Rotterdam announced upon completion of the project that there was a surplus of 28 million euro on the total budget of 600 million. It is generally believed that the investment of nearly a billion US dollars will pay off in attracting businesses and international corporate headquarters to Rotterdam as well as the creation of employment. Whether it will assure that Rotterdam will appear in international lists of ‘must-visit’ towns in 2015 is something only the future will tell.